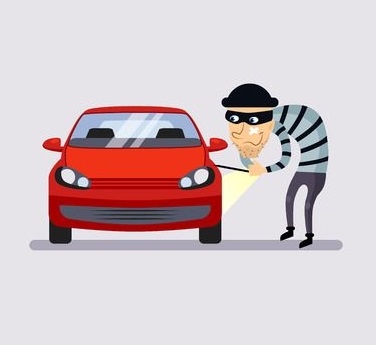 Car theft has been on the rise consistently since 2014, with over $6 billion in losses annually over the past 3 years.

The Dodge Charger Hemi and the Dodge Challenger Hellcat are the most commonly stolen vehicles, followed by the Infiniti Q50 sedan, the Infiniti QX80 SUV and the GMC Sierra 1500 crew cab truck. That said, almost any vehicle is vulnerable to some degree.

Fortunately, you can take precautions to reduce the chances of having your car stolen, such as:

Always lock the doors and close the windows - Try to get in the habit of double-checking that your doors are locked and that all of your windows are closed after you have parked your vehicle.

Also, don't warm up your vehicle, leaving it unattended outside your home before you leave. Many homeowners have had their cars stolen while letting the car run for five minutes before leaving for work.

Park in well-lit areas - A car parked in a dark area of a parking lot is an attractive target for a thief. While you don't have to be concerned about this during the day, once its dark, try to find a spot underneath a light that's well-lit and well-trafficked.

If you plan on working late, park in a well-lit area and, if you have been asked to work overtime, ask to go out and move your car to a better location.

Thieves won't be so willing to rummage through a car with a spotlight on them and a potential audience just around the corner.

Hide your valuables - Never leave any valuables in plain sight when parking your vehicle. Money, wallets, purses, electronics and more might as well be neon flashing lights for a potential thief.

Put yourself in the thief's shoes. Which car would you rather break into? The one that has nothing of value that you can see, or the one with an iPad in the back seat?

If you must leave something important in your car, put it in the trunk before you reach your destination. Experienced thieves have been known to stake out parking lots, look for drivers transferring things to their trunk, and then break into it.

Some things you should never leave in plain sight include:

Invest in an anti-theft system - Whether it's a steering wheel lock, window alarm or ignition cut-off system, anything that makes a thief work harder could also make your auto safer. If it will slow them down or potentially get them caught, they'll probably pass.

Park near other people - Go for busy lots where there's plenty of pedestrian and vehicle traffic.

Be alert for signs of car thieves - Be on the lookout for suspicious activity. Trust your instincts and don't park if you see anything unusual or if you have a bad feeling. And never confront anyone yourself. If you're concerned, report your suspicions to an attendant or the police.